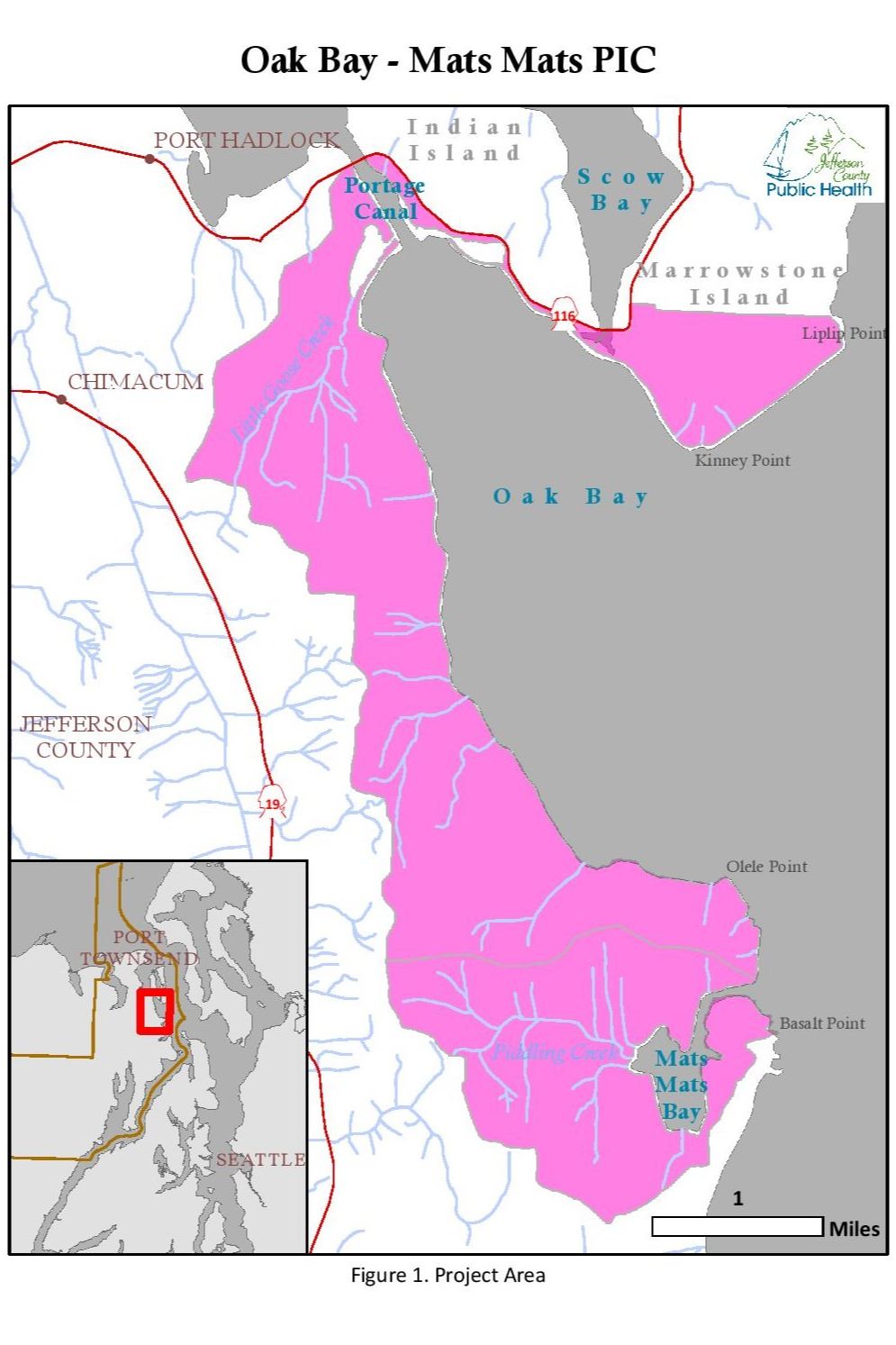 Jefferson County Public Health (JCPH) started the Oak Bay-Mats Mats Bay Pollution Identification and Correction (PIC) Project to protect communities from waterborne pathogens, by keeping shellfish beds and waters open and safe for recreation. The Oak Bay-Mats Mats Bay PIC project covers 13.5 miles of coastline from Liplip Point on South Marrowstone Island to Basalt Point in Mats Mats Bay. This area was deemed a high priority area in the Hood Canal Action Area by the Hood Canal Regional PIC program. Mats Mats Bay was listed as threatened by bacteria in 2008 by the Washington State Department of Health. For the current project, Jefferson County Public Health will continue monitoring this area for E.coli bacteria and Enterococcus bacteria. These bacteria indicate the presence of pathogens that could impact human health. Both are present in the feces of warm-blooded animals, including humans, livestock and wildlife. Freshwater will be tested for E.coli, and brackish water will be tested for Enterococcus, as it survives better in saltwater than E.coli bacteria.

The project began August 2018 and continues through August 2021. One of the key goals of this project is to address persistent bacteria presence at Little Goose Creek near Oak Bay County Park, which has caused a shellfish closure area. Shellfish areas have been impacted by pollution in this and other parts of Hood Canal, and it is the goal of this project to prevent that from occurring further. Other goals include collecting data that will be useful in future trend analyses and working towards removing waterbodies from the impaired list.

The scope of work for the Oak Bay-Mats Mats Bay PIC project includes:

Pollution correction is the process of finding one or more sources contributing to the problem. The process has three steps.

1. Sampling each site with elevated bacteria 3 times within 30 days for an average, and bracket sampling at sites upstream to narrow down the potential source area.

2. Researching of septic system permits and maintenance records followed by septic system surveys of all nearby properties. Suspect systems can be dye tested by placing harmless dye into plumbing fixtures. This dye is either visually accounted for in nearby surface water or collected in charcoal packs and analyzed at a laboratory. A dye test would indicate whether a septic system is functioning as intended and adequately treating the wastewater that flows through it.

3. Working with homeowners to repair or replace leaking septic systems. We help connect homeowners with local resources including non-profits such as Craft3, Habitat for Humanity, and OlyCap, or other low- and no-cost financial assistance programs such as the USDA Rural Development Program.

Staff will also be doing public outreach and education on septic system care and maintenance because these systems are a potential source of contamination. The Oak Bay and Mats Mats Bay areas contain over 600 septic systems, many of which are more than 30 years old. The status and condition of septic systems in the project area will be better understood upon completion of the project.

A JCPH septic system survey consists of a 5-minute questionnaire on your water use patterns and maintenance history, tips for maintaining your system, followed by a quick visual assessment of the septic system components. When available, JCPH provides a copy of the “as-built” drawing from the permit files and the most recent septic system inspection report to the homeowner, as a courtesy. It’s easier to take care of components when you know where they are located!

A Washington State Department of Ecology grant provides 75% of the funding for this project, with 25% match funding from the Jefferson County Clean Water District.

A final meeting was held virtually on March 7, 2022. A copy of the presentation can be found here.