Shellfish growing areas are classified by the Washington State Department of Health (DOH) as either Approved, Conditionally Approved, Restricted or Prohibited based on yearly water quality sampling to make sure that they meet fecal coliform bacteria standards under the National Shellfish Sanitation Program (NSSP). In the December 2016 report for Hood Canal Area 3 (latest Report Addendum here), which includes shoreline areas from Brinnon, the mouth of the Duckabush and Dosewallips Rivers, and south into Mason County, the DOH found that, while most stations passed the NSSP water quality standard for Approved classification, one, Station 137 near the mouth of the Duckabush, is currently failing the standard and several nearby stations are also threatened or of concern. As a result, the State Department of Health is planning to downgrade shoreline area near the mouth of the Duckabush from “Approved” to “Conditionally Approved” in September 2017.

What this means for commercial shellfish harvesters is that the shoreline area off the mouth of the Duckabush (see Map) will be closed to shellfish harvesting from May 1 to October 31 each year, when fecal coliform concentrations are highest or until water quality at these stations improves. It is expected that the recreational shellfish area will have similar restrictions.

To address this concern, Jefferson County Public Health is initiating the Central Hood Canal Pollution Identification and Control Project to do more monitoring in this area and try to identify sources of elevated fecal coliform bacteria contamination. We’ll also be doing increased public outreach and education on septic system care and maintenance because these systems are a potential source of the contamination.

The project begins with a kick-off Open House on August 24th at the Brinnon Community Center from 6:00 to 7:30 pm. This will be an opportunity for the public to learn more about the downgrade as well as get free information about grants and affordable loan programs for residents who may need to do septic repair/replacement. 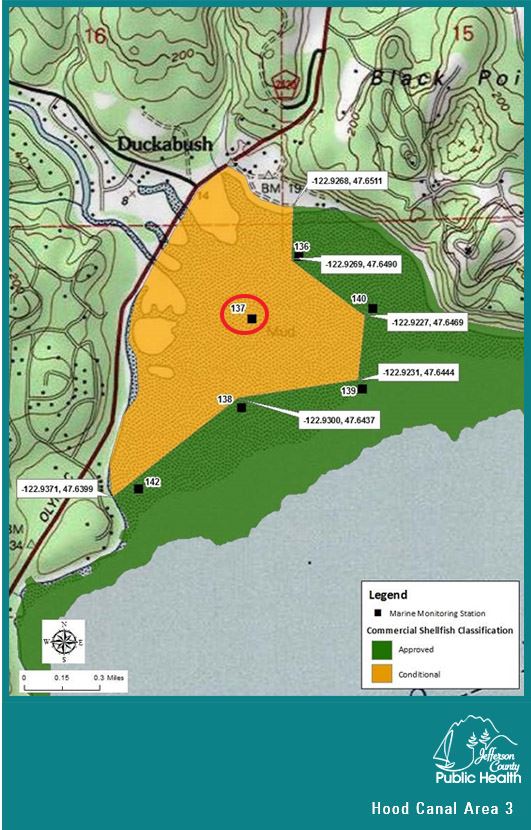 Working for Jefferson County Public Health since Spring of 2015, Anna Bachmann is the Team Lead for the Central Hood Canal PIC Project and the Hood Canal Priority Basins Project.

The Central Hood Canal Project began in the January 2017 and will run through December 2019. This project focuses on the Duckabush and Dosewallips Rivers and the Fulton Creek area of Southeast Jefferson County.